NEXT STORY: Suva, Fiji – or – Back to South Pacific Cruise page

Stop number three on the Celebrity Solstice Pacific Island Cruise was Lautoka, a city on the island of Viti Levu, Fiji.

On this stop, I opted for an excursion to a natural thermal mud spa. Located at the base of the Sabeto mountains, the spa promises an invigorating and rejuvenating experience!

The spa is a 45 minute bus ride from the port. As I was boarding the bus, a very happy Fijian kept shouting at me. It sounded like “boo-lah”. I had no idea what it meant, so I just smiled. Turns out, “Bula” is the Fijian word for “hello!”

For the duration of our ride, our guide kept us entertained with stories about the land, the people and the culture.

The Fijian people are a very happy and proud people. Sugar and Tourism are their largest foreign exchange commodities. Fijians are always happy to see a busload of tourists driving by – we got many smiles and waves as we traveled the dirt roads to the spa.

Upon our arrival at the spa, we were greeted with music and dancing (video)! The national dress in Fiji is a skirt called a “sulu.” Both men and women wear them. The men’s version of the skirt contains pockets. Our guide referred to them as “pocket skirts.” He joked that they were kind of like kilt’s, except that they wear underwear under…there! 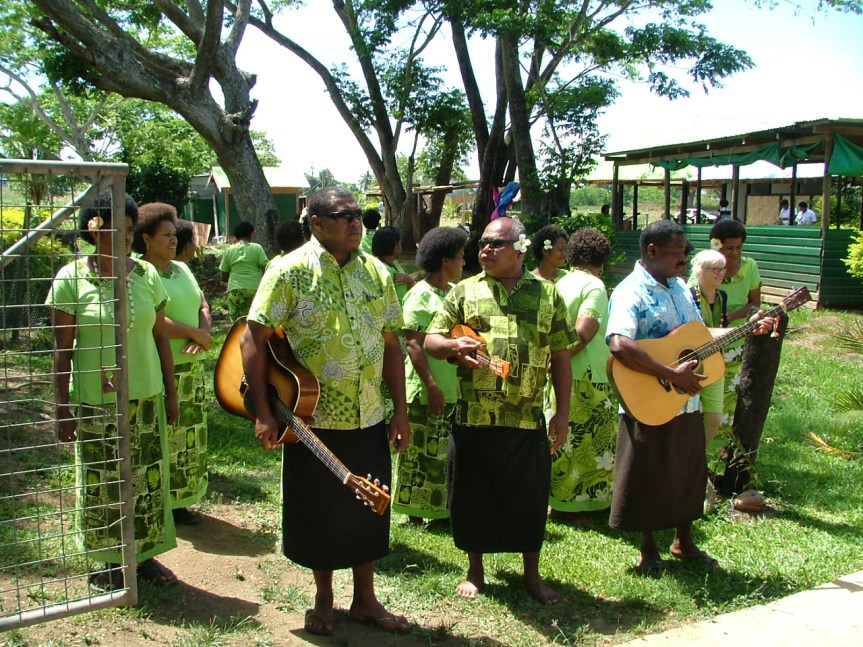 Before leaving the bus, we were instructed to remove our sunglasses and hats prior to meeting the chief. We then were taken to a pavilion where we sat on woven mats and were treated to a Kava ceremony.

The Kava ceremony includes the chief and several other males. The chief offers the Kava cup to each of the “leaders” in our group. There is a specific set of steps to be followed, including some very precise and deliberate hand clapping, and shouts of Bula! Once the leaders have gone through their exchange, the cup is offered to each visitor. The females are the servers of the cup to the visitors. The drink doesn’t have much flavor. It’s kind of like drinking chalky water with a slightly nutty aftertaste.

Yaqona (pronounced yung-gohna), otherwise known as kava – another important traditional custom – is an infusion prepared from the root of Piper methysticum, a type of pepper plant. The plant itself is also often referred to as yaqona or the kava plant. Yaqona is extremely important in indigenous Fijian culture – in the time of the ‘old religion’ it was used ceremonially by chiefs and priests only. Today, yaqona is part of daily life, both in villages and in urban areas and across all classes and walks of life. ‘Having a grog’ or ‘drinking grog’, as drinking kava is sometimes known, is used for welcoming and bonding with visitors, for storytelling sessions or merely for passing time.

Next we were taken in groups of ten to start the mud spa experience. We stripped down to our swimsuits and were escorted to the first stop – a bucket of mud. It was thick and slimy and slightly green. We were told to smear the mud all over any exposed skin, including our faces. It’s important to put it on thick enough to cover, but not so thick that it’ll never dry. Many in our group were even slathering it on their heads and underneath swimsuits! I didn’t put it on my head, but… 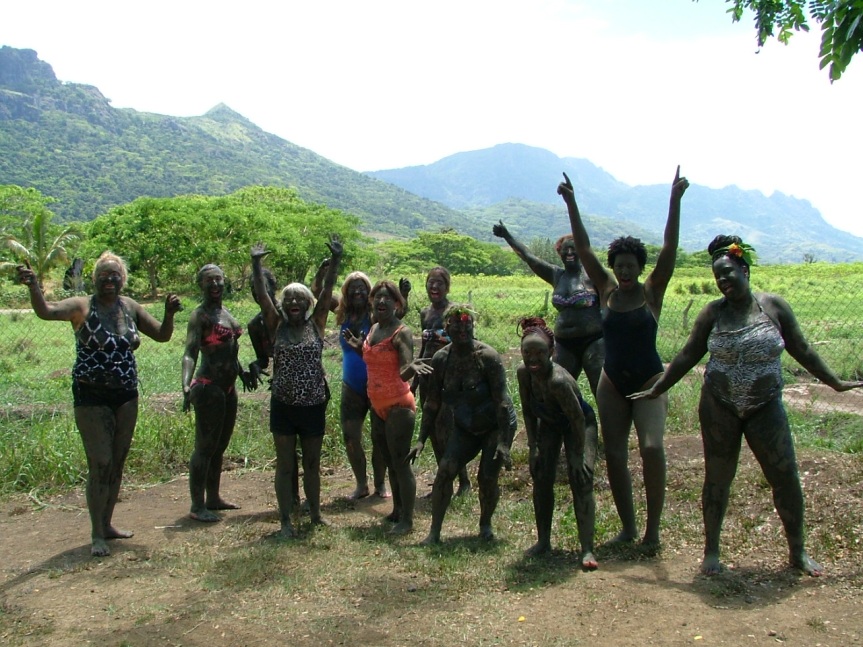 Once we were fully coated in mud, we were led to a shaded area where we could dry without burning up in the sun. We were told about how the mud has so many benefits because it contains volcanic ash. We were shown a hot spring, which was roped-off for our protection, where the water bubbles up out of the ground at a whopping 72 degrees Celsius (161 F)!

After we had thoroughly dried, we were taken to a small pool filled with cool water (and all the mud from hundreds of previous tourists that squished between our toes). Here we soaked for a few minutes as we scrubbed the mud off all the body parts we had covered.

Next it was over to the hot spring pool to float for a few minutes and just relax.

After leaving the hot pool, we were brought back to the pavilion for massages.

Finally a little more singing and dancing to send us on our way! 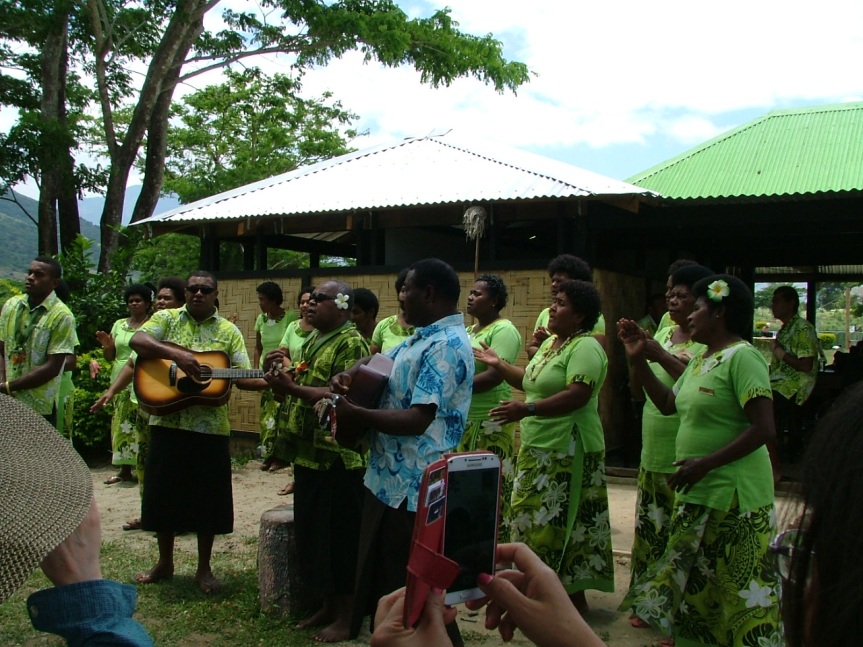 Back at the pier, there were a pair of Fijians in native dress for photo ops, and several tents waiting with beautiful things to see and buy.

Lautoka is the second largest city of Fiji. It is in the west of the island of Viti Levu, 24 kilometres north of Nadi, and is the second port of entry in Fiji, after Suva. Lying in the heart of Fiji’s sugar cane growing region, it is known as the Sugar City. Covering an area of 16 square kilometres, it had a population of 52,220 at the 2007 census, the most recent to date.

Lautoka is the only city in Fiji’s Western Division, and is the industrial hub of Fiji which contains more than 50 percent of the nation’s population.

That’s all for now! Vinaka! (Thank you!)

NEXT STORY: Suva, Fiji – or – Back to South Pacific Cruise page

One thought on “Lautoka, Fiji”